‘Live authentically and savour each precious moment of your journey, because when you arrive at your destination another journey begins’. – Joe Keane

[So, how this works is each week I will write to someone on my list, picked randomly and I will post it online, on this blog – just in case the letter doesn’t reach it’s destination.  The letter includes a card with a random quote, which I hope you will enjoy (at the top of this blog page).]

Wow, already week 2 of my 52 weeks are done! The time seems to be flying, and I’ve not even made it onto the ‘big’ plane to take me back to Canada.  I’ve had an excellent week with John’s rellies in the south of Holland.

We went for a bike ride

– it’s where Napoleon stopped building his canal in Northern Europe, went to the only American Soldiers memorial site for all those who died on Dutch soil – always a sobering moment, made it to a place in which you can stand in 3 countries at once 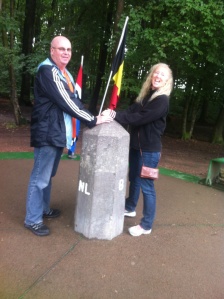 – Holland, Belgium and Germany, went to the highest point in Holland 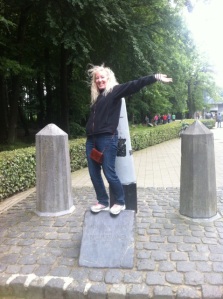 – not very high in Canadian terms (I would call it a bump), had a Schnitzel and Apfel Strudel in a beautiful medieval village (Monshau) in Germany, went round a maze and had a little help from German friends to get to the middle without getting wet, watch the world football (soccer) series where Germany won, but Holland had a very respectable finish with third and then had a lovely meal in Valkenburg – in the South of Holland – a tourist town with mineral spas and many old buildings and city walls.

What’s your favourite international food?  I’ve just had one of mine, so would like to possible try yours!

Today it’s back to England to do the final preparations on the house for the renters and get ready to do ‘Miss Givings‘ (my one woman show) at the Henley Fringe Festival.